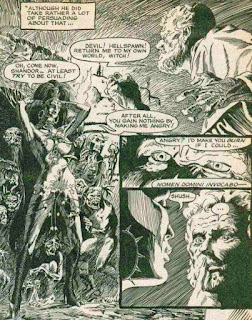 Father Shandor started as a non-nonsense monster killer, a priest with a sharp hunting eye and an absolute hatred for the monsters who prey on humanity. His first appearance was as the rough and tough Andrew Keir in Hammer's Dracula Prince of Darkness, brutally staking Barbara Shelley and making sure Dracula sank beneath the ice.

While there were no more further cinematic adventures for the good Father, he had a surprising second life as a demon killer in the House Of Hammer - Dez Skinn's earlier publication, and sixteen years after dispatching Dracula, he had more new adventures in almost every issue of Warrior.

Written by Steve Moore - who seemed to write every second strip in Warrior - the series had, for the most part, some gorgeously gloomy art by John Bolton, who would later go on to do some behind-the-scenes X-adventures in Classic X-Men. Bolton's early black and white art is moody as hell - sometimes literally - selling the horror with every panel and unrelentingly haunting.

The story took Shandor far from the Transylvanian roots, into other worlds and dimensions and states of being, and then dumps him back on Earth with a terrible touch of death. Shandor was always doomed in his defence against the darkest of magic, inevitably tainted by the demonic arts.

Shandor needed this flights of fancy, because it was one of the creakiest premises in the comic, it needed to go to new palaces. (It certainly didn't need an origin for Klove, Dracula's minion in Prince of Darkness, explaining how a man could fall prey to such evil, but got one anyway.) A holdout from a slightly earlier era in British comics, and a righteous fury from an earlier age, Shandor ended up in strange new places, making him an easy fit among the other Warriors.
Posted by Bob Temuka at 5:17 PM