Catching up on Benny 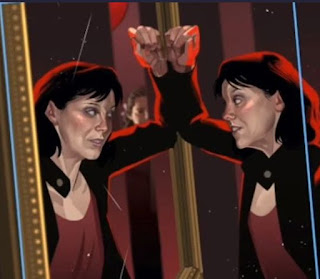 Professor Bernice Summerfield is one of the greatest Dr Who creations to never appear on the TV show, an intelligent, strong-willed and hard-drinking woman who has saved the entire bloody universe several times, and raged all over time and space.

After reading the first couple of Benny stories recently, as part of a foolhardy quest to get through all of the 90s New Adventures books, I tried to catch up on what the character has been up to over the years. And I just couldn't keep up, even with just the summaries that could be found online.

I could keep in touch of Benny's misadventures through all of time and space while the novels - both the Doctor Who and Benny solo stories - were still being published by Virgin. But that all finished 20 years ago and there has been a metric shit-tonne of Benny adventures since then.

There are endless audio adventures and full-length novels and short story collections. I got the idea that the good professor had saved the universe several times, had hung around with the Doctor's brother and even palled around with an alternate universe version of the big man himself. But even the most basic wiki entries on Benny's adventures are so complicated and tangled, it's impossible to keep up.

It's just so much content, for a sub-genre of a sub-genre of a sub-genre. There's obviously a market for the New Adventures of Benny, otherwise they wouldn't keep making them. (And she is a cracking character.) But I can barely keep track of Doctor Who - and am completely fucking lost trying to follow what happens in the audio stories - let along this significant slice of that mad, sprawling universe.

I'll keep reading the adventures of Professor Summerfield in those original New Adventures, for at least the next few years, but I'll barely touch on her latest adventures. There's just too much.
Posted by Bob Temuka at 7:04 PM