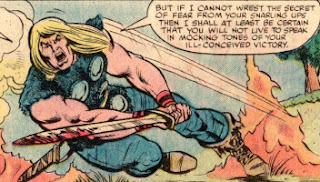 Reading some old Marvel comics is usually a nice, calming influence, and it's always fun to chill out on the overwrought melodramatics and spacey superheroics in simple tales of times go by. There's tonnes of them in the local library system, and I regularly load up on them.

And when it's something like a big, chunky reprint of the Thor issues where the whole Celestials On Earth thing is first sorted out, that was exactly what I was after. I read the earlier Eternals comics by Kirby that set up the scenario years and years ago, but had never seen that resolution in Thor #300. I knew what happened mainly from the detailed synopsis of the Marvel Handbooks, and had somehow picked up the fact that the Destroyer was heavily involved in the climax, but I had no idea how it actually went down.

So I'm reading the book and it's all going along nicely with the usual Eternal nonsense, until the disembodied eye of Odin starts retelling the Ring Saga, and I had fucking idea what was going on. There are multiple reincarnations of multiple characters, and things are happening for some reason, and there's a lot of words and if I genuinely can't follow what's going on as a 46-year-old, how the shit would I have been able to follow it as a kid?

I'm sure Roy Thomas felt it was all perfectly clear, because he spent his entire comics writing career always being perfectly clear. But he also liked squeezing old highbrow culture into his superhero comics and they just did not always fit. And with little knowledge of the whole Nibelungenlied saga - I think I read a P Craig Russell comic back in the 90s? - I was completely baffled by the whole thing and couldn't follow it at all.

By the end the comic suddenly remembers about the Celestials, and sorts all that out with a lovely big apocalyptic battle. And even though Roy went off to DC in the middle of all this thing, it is genuinely interesting to see how it all plays out. I just wish we didn't have to take the Ring road to get there.