The big picture always gives me a big headache 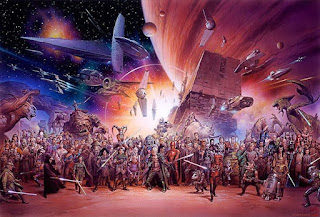 And there it was, right at the end of second season of The Mandalorian, after a bunch of fine self-contained episodes with clear influences from only the best samurai and western films, and then it all becomes a big thing with a bloody great sword from some cartoon I never saw and it's suddenly all about who will be a king and who's worthy to carry this sword of destiny and who gives a damn? It kills the momentum of the story as dead as all those imperial corpses littering the scene.

Geek culture needs to be constantly told that the things they are consuming matter, and that they are part of the bigger picture and are necessary to it - and you gotta get it all, or you might as well get nothing.

It's been like that in comics for decades, which is why DC keeps fucking up its reboots, because they're scared of hurting the feelings of nerds who really, really want The Killing Joke to still matter, and now it has infected the wider culture.

People talk about superhero films taking over the movies, but it's this 'Everything s Important' attitude that is the real invader of modern society, this insatiable need for everything to be part of a huge tapestry that stitches together perfectly, with no frayed edges.

Obviously, the best geek comics of all time are all self contained, telling a beginning, middle and end in a couple of hundred pages. Watchmen sells forever and absolutely nobody cares about Countdown to Final Crisis and all of its many spin-offs anymore, if they ever did in the first place. It definitely didn't matter how crucial it was to understand the current state of the DC universe, not anymore.

Not everything has to be part of something big. Let the Mando do his own thing.