It is a small world, after all 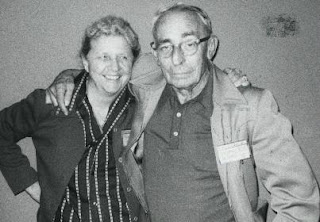 Even after so many years of inhaling pure geek shit about comics and movies, there is so much neat trivia to find out about, and it's always a blast. Especially when it reminds you how small this world really is.

After all, I only just learned today that the man who pretty much created the Legion of Super-Heroes as we know it - science fiction writer big Ed Hamilton - was married for decades to the mighty screenwriter Leigh Brackett, who did outstanding work on everything from The Big Sleep and The Long Goodbye to Rio Bravo and The Empire Strikes Back.

Imagine the conversations in that household! They must have been a hell of a great couple to have a dinner party with.

And then I also learned today that Bill and Ted were co-created by Richard Matheson's son. I always knew Ed Solomon was involved, mainly because of the shitty De Nomolos joke, but never made the connection between his writing partner Chris Matheson and the Matheson who had essentially created the zombie apocalypse as we know it with I Am Legend.

Sometimes it feels like a big, bad world, and we're all alone and disconnected from each other, and sometimes it really doesn't.