What are you really remembered for, Mort? 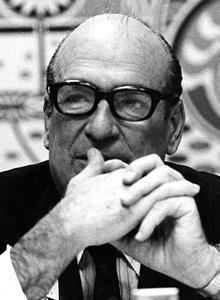 Mort Weisinger kept Superman comics at the top of the sales charts for decades, to the point where he arguably almost strangled the concept to death. He also created characters like Aquaman and Green Arrow, which have lasted longer and generated vast fortunes that Mort could only ever imagine. He was also a terrible and overbearing human being by all accounts, bullying creators and editorial staff with undisguised glee, and he was a shit to restaurant waiters.

At least, that's how he's remembered now, long after he passed away. He couldn't even do anything about that legacy when he was alive, he can't do anything from beyond the grave.

If you ever read old interviews with Mort, he's always talking up his accomplishments, claiming credit for almost everything, while never failing to mention that his book about how to be a cheap bastard in modern America has sold millions and made him rich.

He's schmoozing with Hollywood powers and travelling the globe and none of that matters, not when the reputation is all that really lasts. And that reputation might be well deserved or it could grow over time, and there's nothing you can do about that kind of legacy, except be a better person in the first place.

The ultimate lesson is simple and one that all those Superman comics could have taught Mort - don't be a dickhead. That always comes out, and then nobody cares how many comics you were behind, they just rightfully care about the people you hurt. Nobody wants to pay tribute to an asshole.