Even the Warehouse is giving up on the DVDs 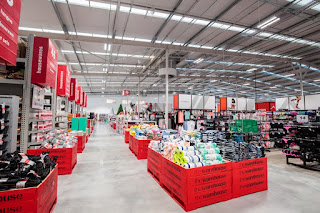 The Warehouse is the local equivalent of the Wal-Mart behemoth, offering up vast stores of cheap goods, making their money in pure bulk. It's where you go to get a new toothbrush or rubbish bin or gardening supplies or anything you need.

It's also the place where I bought so much of pop culture over the years, because that was often the only option for me. As independent bookshops and record stores vanished into the ether over the decades, it's often been the only place in town still selling new CDs and DVDs.

Not anymore. All the Warehouse stores around me have visibly given up the physical media game in the past few weeks, liquidating their entire stocks in all their local stores, replacing it all with generic tech and devices.

It was inevitable, but it's still a bummer. It used to be the only place I could find my widescreen videos - I wasn't getting Empire of the Sun in all its glory anywhere else - and some Supergrass CDs I paid cash money for in the 90s are still getting played on the car stereo.

The stores have gone, and the physical object is replaced by all that stuff in the cloud, able to evaporate at a moment's notice. I'll snap up the last few Mission Impossible movies I need when they're selling them for 97 cents, and I need to do it while I can. That's all I'm getting from that place anymore.