Working in the office 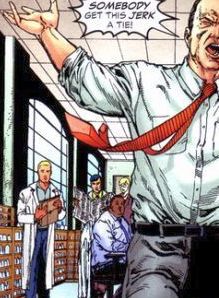 There's a scene in one of the Flash comics by Geoff Johns from more than a decade ago - I think it's somewhere soon after Johns brought Barry back, but I'm damned if I'm going back through all those comics - where the title character meets his new workmates, and it became crushingly obvious that Johns had never really worked in a real office before.

Because every character in the lab is instantly just so mean and snarky and belittling towards a new co-worker, and while that might be fine for TV sitcoms and superhero nonsense, any office that worked like that in the real world would just fall apart.

Every office has its share of shitty people at the next desk - sad to say, if you can't think of one, it's probably you - but they're also a place where people have to work together to achieve some kind of goal, and if you can't do that, you're not going to last very long.

And when someone new starts, you don't immediately go on the defensive,  unless you're a total sociopath. It might be more dramatic, but it's a fake reality, as unreal as the goddamn speed force.

I wonder about this, when the whole world is on slack and zoom, stuck in their little digital. People mastered the art of working remotely really quickly, but we still need to know how to work together, right? We can't live with anything else.