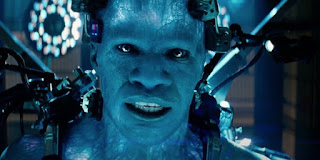 There is no actor alive that has managed to spit out a threat against Spider-Man in a movie without sounding totally goofy. There have been some fantastic actors that have given it a go, including Willem Defoe and Rhys Ifans and Michael Keaton and Jamie Foxx and many, many others, and they've all failed to really get across any sense of threat or menace. Just saying the name of the web-crawler out loud is utterly ridiculous.

This is not actually a complaint - sheer goofiness is the indispensable secret sauce of all superhero fiction, no matter how many noted comic scholars detest the idea that they aren't always taken absolutely seriously. Superheroes are an inherently dopey proposition, and long may that continue.

But as hard as they strive to bring some realism and grounding into superhero movies, nobody can sell the seriousness of a dangerous situation by yelling about Spider-Man.

It doesn't matter what universe he's in, or what kind of Spider-Man he is, the goofiness is right there in the name, man. There's just no getting around that. Embrace it, or go home.