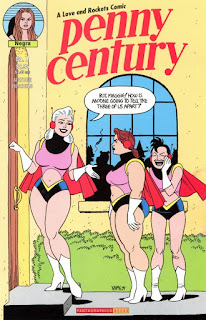 Before social media came along and fucked it up for everyone, the online message boards were the place to be, and there was something for everyone. All sorts of different slices of culture and society carved out their own immaterial spaces, with endless posts about model trains or knitting or, inevitably, comic books.

For a significant chunk of the late '90s I was a CBR boy, all the way up to NEB fanfiction. There were other options like the Alvaro boards, but they didn't have the same personality. The scariest place was undoubtedly the Comics Journal board.

I came late to the Journal in any format, only coming on board a few years before they established a digital footprint, after finding a small pile of them in a strange magazine shop that was closing down. They were mean and snarky and full of the best comic interviews I'd ever read, with Joe Kubert, Grant Morrison, Frank Frazetta and the immortal Los Bros Hernandez all featured.

Even though I was a total dork of the kind the Journal routinely sneered at, I lapped it all up and lurked on their very first message board. They were still way too cool for school, and I generally stayed at CBR.

But a couple of times I sucked up the courage to do a few posts at TCJ.com, wanting to talk about Love and Rockets, because it was as brilliant as ever, and nobody was talking about it. It never went far, because the only responses I ever got was that Jaime's art was too pretty and Beto was a shadow of his former self, neither of which ideas I agreed with in any way.

Within a few years and at least one total revamp, the Journal's message board became something really quite unsettling, with massive feuds I could never follow and a weird adoration/disgust for everything and anything. The world didn't lose much when that died away, and a ghost still lingers on Twitter and in the comments of reviews the Journal still puts out, but it's only a ghost.

I still want to talk about new Love and Rockets because it is as brilliant as ever, and nobody is talking about them, so I always write something every time a new issue comes out. Some things remain as cool as ever. And Jaime's art can never be too pretty.

I never ventured into the CJ message boards, but I did leave a few comments on their blog posts. One time I mentioned the 'revenge' interview Gary Groth and Kim Thompson held with Grant Morrison after he trash-talked the Eros line in a Drivel column in Speakeasy. I always enjoyed that interview because it was Gary and Kim on top brutal form, but Grant was clearly game for a laugh regardless. Anyway, I just threw it out there as an interesting and dusty crevice of UK comics press history, and Kim T. replied with his own memories of the session, which was a really nice surprise.