Everyone can do a journalism, can't they? 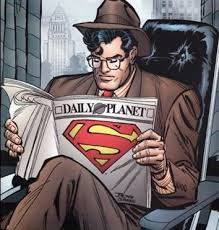 The Daily Planet has the worst fucking subs in the world. Their big lead stories are full of flowery words, have intros that are stuffed with passive language and they always bury the fucking lede in the fucking fifth paragraph. Does anyone actually look at these things?

No newsroom I've ever worked for have put out copy this sloppy - editorials disguised as straight news, feature-type writing on breaking events and just terrible news judgement. Journalism is something that anybody who writes think they can do - after all, they consume a lot of it - but there are still rules, motherfuckers, and they are there for a reason.

The Daily Bugle is as bad as almost any other fictional newspaper, but stands out. You don't see as much in other artifical newsrooms like the Daily Bugle, because the writers at that paper are supporting characters. But Lois Lane and Clark Kent are meant to be award-winning reporters, and their finished copy that goes to print looks like deranged rants, with outrageous headlines.

It's the same in every medium - there is an incomprehensible headline in the new Justice League cut that is a piss-poor excuse for an Ayn Rand reference - but they keep publishing news stories in the comics that are absolute nightmares. It's been going on for years and years now and never gets any better, and there were two particularly egregious examples in some recent Superman comic by Bendis, and I wanted to take a red pen to my library copy, with something to fix in literally every line.

But there was also something new in these comics, and Bendis got it just as appallingly wrong. There's a Twitter feed, where the writer parcels out bits of information in the form of tweets. Whether that works or not as a storytelling technique is debatable, but while I can believe a man can fly, I can't believe that any news organisation would do this: 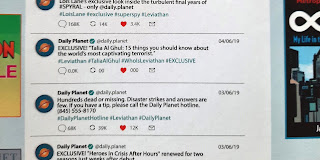 I get really nervous dealing with the biggest stories in the country and this is wise because if you fuck them up, you're fucking fired. There are no excuses.

And I love the social media and editorial teams that I work with, but if one of them put out something about a hot terrorist, one day after a mystery attack that killed hundreds, they would be fucking gone. Any media outlet would be rightfully crucified for that kind of shit.

The only horrible explanation is that the DC universe is such a nightmare that hundreds of people are getting killed all the time - gassed at the movies by the Joker, blown up in an airplane crash by Kobra - so it's no big deal when more are slaughtered, and everybody goes on their way.

But still, it's just bad media. And for fuck's sake, don't start a fucking news story with: 'In what he thought was a....', you absolute fucking child of a news writer. An old-school sub would eat your fucking face off for that.