The unexpected familiarity of Handbook panels 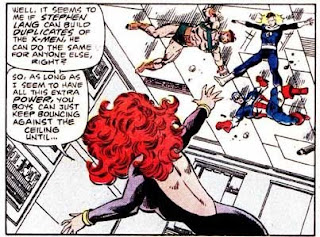 There is something weirdly satisfying in reading collections of old comics and finding panels that they used the to fill out the entries in the Official Handbook Of The Marvel Universe Deluxe Edition, in their original context.

DC's Who's Who went for original art, and got some stunning portraits from many, many great artists - it's where you go for Jaime Hernandez doing Legion of Super-Heroes girls, - but the Handbook just cut and pasted panels from recent comics, spending the minimum of effort to wipe out the word balloons.

I didn't have access to reprints or original comics when I was a full Marvel zombie, but I did have all the handbooks, and would sear those entries into the brain. So when they show up in the original story, they're a sudden blast of the familiar. I know those panels like the back of my hand.