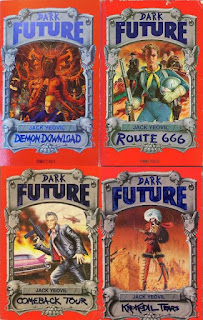 If I had the funds and influence to get any writer in the world to complete any novel, I am 100 percent certain that I would get Kim Newman - and maybe Eugene Byrne - to do the last Dark Future: Demon Download book. Get him to finish the series he started 30 years ago with the long-promised United States Calvary, and have Jeesamyn Bonney, Chantal Juillerat, Nathan Stack, Hawk-That-Settles, Redd Harvest and Colonel Elvis Presley face off against the ultimate darkness from beyond the veil.

He can keep writing Anno Dracula books until the end of time, but I'd pay him anything to read that book, with the added stipulation that he has to write it in a couple of weeks, just like he did. The kind of thing that made those Dark Future books so much fun has now been done a thousand times - the glorious cacophony of movie serial killers at the end of Korokdil Tears is the sort of thing you see in fuckin' Space Jam films now - but I'd give anything to get that widescreen apocalypse on the page.