The collection is getting sharper 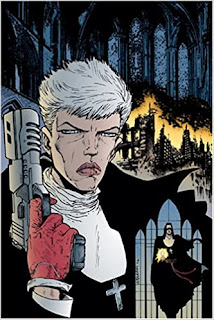 I've been slowly coming to the end of a long, relentless and ruthless purge in the comic collection. It's taken a few years of thoughtful judgement to decide if I really need all those Final Night comics, but I'm starting to run out of things to sell.

And it's looking sharp! All the fat of the collection has been trimmed off the side - once you decide you don't need absolutely everything a particular creator has ever done, (thanks Violator v Badrock ), you can be quite happy with only the best os someone like Garth Ennis. This mainly meant just keeping the war comics and ditching most of the superhero pisstakes, although all those last ugly, ugly War Stories were some of the first to go. Bad art gets the purge before anything else - never mind the War Stories, I don't have any Avatar comics left at all.

And while I'll hold onto the Hitman comics until the end of all things, I didn't really need the two Bloody Mary and two Just a Pilgrim comics, even with the usual lovely Carlos Ezquerra artwork, and even though I bought them all, shining and new, off the shelf somewhere in the 90s and have held onto them all this time. They can still go.

Just in the last month, I've got rid of the Gaiman/Romita Jr Eternals, because I've read it three or four times and the only thing that ever sticks in my mind is the page where Iron Man comes though the wall, and a bunch of extraneous Vertigo, and some Concrete double-ups, and multiple What If and Thor and Avengers comics that were helpfully forgettable.

Goodbye Accident Man, you were the worst of Pat Mills. So long, Master of Kung Fu comics from the year I was born, you never really meant anything to me. Farewell, the few Mike Grell Legion of Super Heroes I have - 5YL Legion is the only one that I ever cared about.

(This is not true. Maybe I'll hold onto those Legions.)

All of this was necessary as a matter of space, but it also helps you sort out the comics you really want to keep, and those you don't. It's a constant process, and the stuff that's left shines that much harder. If it doesn't look beautiful, have a wicked script or have a weird emotional connection to me, it's out the door.

To be fair - there are still thousands of comics that fit that description, so it's still a weighty, ponderous thing, but it could always be just a little bit sharper.