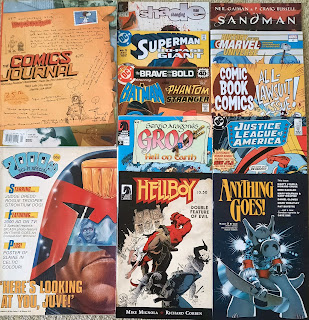 International travel was a great opportunity to explore new societies, see new sights and check out comic book shops all over the world. Every trip we took for a decade ended with a haul of some kind of comic goodness, even when we were going to Outer Mongolia

Those travelling days are done, for the time being, and in some pathetic sort of compensation, I get a dozen issues every six months or so from Mycomicshop.com. It still feels a little like cheating and the postage remains exorbitant, but if you get enough deals, and just the right amount of comics, it can work out okay.

When you live on the arse end of the world, every key comic is precious, especially when they're so bloody hard to find.

So I end up spending months logged in on the site, with items sitting in the checkout, refining the amount. Sometimes it gets out of control, and sometimes the issues I want disappear or won't get sent to this country (there are many, many Judge Dredd Megazines I've tried to buy from them, but they refuse to send overseas for some reason.) But eventually, I get a good dozen.

It's still such a rush to get them in the mail every six months. This time I got a Comics Journal, and a 2000ad sci-fi special that I bought off the shelves in 1986 and literally read to pieces years ago. Issues of Groo and Hellboy and Shade that I still need to complete runs, and one-offs like a Superman comic that contains a hidden Sixpack story by Garth Ennis.

There is always a Brave and the Bold comic, and some recent thing - I could not find the last issue of the History of the Marvel Universe with the gorgeous page designs of Javier Rodríguez anywhere in this whole bloody country - and some kind of alt-comics anthology thing (this time it's an Anything Goes, from an age where people actually gave a shit about Dave Sim). I have no excuse for that Justice League from the Detroit era, but I've had the first part of that two-parter since I was 10, and always wanted to see how it tutned out.

It's always such a good insight into the current comic tastes and needs. It's not the same as wandering into a comic hop in Portland or Amsterdm or Inverness, but it'll do for now.