My first Kirby love was Mantis 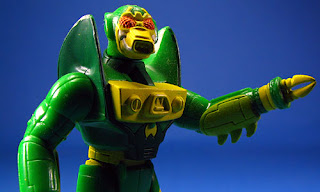 Like a lot of dumb kids, I didn't like Jack Kirby's comics when I first saw them in the 1980s. They were old and chunky and unrefined, and I craved the slicker and more refined work from modern artists, and it took me many, many years to get over it. I obviously think Kirby's stuff is absolutely and mindbogglingly great now, but I wasn't always that way.

In fact, it was an action figure that sold me on Kirby, because it was only in the full dimensions of real life that I saw the power and the glory of Jack's lines.

Most of the Super Powers action figures were the classic Silver/Bronze Age DC look, but a couple of the Fourth World villains were radically redesigned by Kirby and given bold, new life - the Parademon figure became a sharp red nightmare, while the Mantis figure was immediately striking.

I could only find those Super Powers figures at one small toy warehouse that also had a lot of comics I had to have, and you could only ever find a random selection - I never, ever saw a Superman or Batman on the shelves, but there were tonnes of Desaad and Robin and Doctor Fate. And the first one I got was Mantis, without knowing anything about the actual character, because it looked so freaking cool.

A huge armoured figure in eye-searing green, the Mantis design looked fantastic when it was put into the three dimensions of the action figure, unearthly and powerful, the chunky anatomy of Kirby's comic figures given a new flow, with the artist's lines stretching out in new directions. It had vicious claws on the arms, a mean-looking helmet that looked like Darth Vader's ancient ancestor and Mantis' god-level shoulderpads were literally divine (this was the 80s, after all).

There are many ways to get in to Kirby's world and with his work still being strip-mined for multiple billion-dollar franchises, there are plenty of opportunities. Besides, Kirby received some of the only royalties of his extraordinary career for the redesign of his characters for the toy company, so at least the man got paid for my entrance.