History of the Marvel Universe: Staging the history lesson 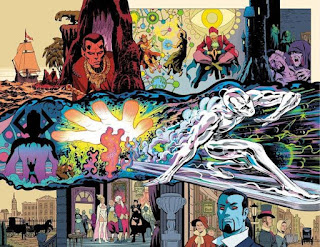 There's something comforting about tying a whole superhero universe together, and insisting that thousands of comics published over decades by hundreds of different creators were actually part of some grand, unified storyline. It never really matches up, but that doesn't mean it's not worth giving it a go, if only to see how they fix the contradictions.

As ostensibly the same universe that began in the early sixties, Marvel keeps trying to do this every few years, and the latest effort from Mark Waid and Javier Rodríguez takes a decent stab at it.

It generally works - the framing device of Franklin Richards and Galactus at the end of time is almost touching, (until you wonder if it really is necessary to remember the New Warriors at the end of all existence), and Waid does skillfully weave together dozens of different retcons that have cropped up over the years.

Waid overreaches with the retconning of the Vietnam War into the Saincong War, which isn't just casually racist in a way the writer certainly never intended, it's also totally unnecessary - there is always a war in the past 15 years that can spawn a Punisher.

Fortunately, Rodríguez glosses over these odd bits of clumsiness with some wonderful artwork, which is the real attraction in this project. His figurework can get a little repetitive, but his general framing and drafting of pages is consistently excellent. This is the kind of thing Perez was always so great at - and did something very similar with the 1980s History of the DC Universe - providing pages and pages of pin-ups that tell the whole idea and theme behind characters and events, without resorting to the same old 'heroes standing on a pile of rubble'.

Rodríguez stages all this history with a terrific eye, and even makes areas that are overly familiar pop with new, vibrant life. History texts can sometimes be ideologically contentious, but they should all look this sexy.
Posted by Bob Temuka at 7:00 PM