We're all turning into Larry Niven 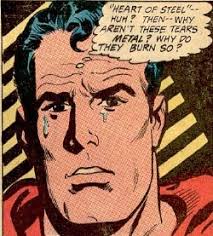 Larry Niven was breaking genuinely new ground in 1971 with his Man Of Steel, Woman Of Kleenex essay, even if he was only putting down in words the sniggering thoughts in many, many little boys' minds. But so many current criticism and thought about how superheroes work is still mining that ground, 50 years later.

It's everywhere - that smartarse voice, that fucking know-it-all attitude, in nitpicks and sneers. Endlessly pointing out flaws with basic concepts as if nobody had ever thought this before. Snark has no currency, but that just makes it cheap for everyone to use.

Niven's article might be the single most referenced and remembered piece of writing from 50 years ago - it's endlessly reprinted and referenced, all these years later. And the central point of Niven's words - that these brash superheroes don't hold up to any kind of real-world scrutiny - is still the default setting for many of those who follow in his footsteps.

It's still funny as fuck, but there are other notes to play.