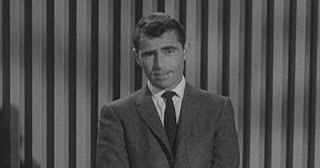 Although I'd seen plenty of the various reboot series, I'd never really watched any of the original Twilight Zone episodes. Of course I knew most of the twists of the most famous stories, because they'd become ingrained in general pop culture, but not the actual episodes as they were first produced all those years ago

I'm slowly filling in that gap now, and even if the twists are easy to predict after years and years of rip-offs and pastiches and outright remakes, they're still charming. They're still clever enough to be interesting, and there are so many episodes that there are more than a few that still manage to surprise with their twists and turns.

But the most surprising thing in the theme music - that classic doodoodoodoo chant that is always so recognizable - wasn't there for the first season. Instead, the original theme by the immortal Bernard Herrmann is a dreamy, meandering affair that doesn't have the short, sharp shock of the more famous theme.

It still works, especially when Rod Serling is still finding his creative feet with the earliest episodes, and everything is more up in the air. But I'm still looking forward to that spinechilling call out into the Twilight Zone.

Watch this episode "An Occurrence at Owl Creek Bridge" maybe one of the simplest, but best episodes. Ambrose Bierce wrote the short story about a captured southern soldier by the Union Army during the Civil War. Such a crisp to the point story.