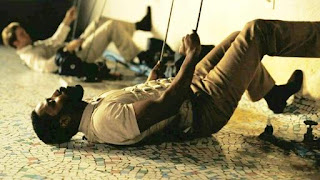 In the Chris Nolan films that bend the physics - through the power of dreams or by running backwards in time - there are small moments that at first glance feel like an event is taking place in one of these impossible spaces, but it's actually happening in the real world.

In Inception, there's a part where Leo is trying to get away from mysterious and faceless bad guys, but he gets stuck in a rapidly narrowing alleyway, until he's shoving himself through, painfully slowly, just like a nightmare you can't wake up from. And in Tenet, it's the backwards bungy jump early on in the film, with the charming heroes leaping into the sky and doing something the wrong way round to exhilarating effect.

They're not just cool set pieces, they're thematically tying the insanity of the high concept to the solidity of the real world, while also showing that reality can be just as mental as the sci-fi games.