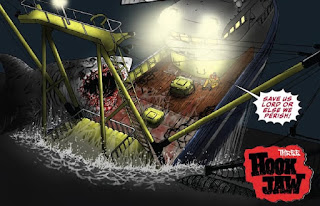 While the Tearoom of Despair is mainly focused on the good stuff in life, because existence is just too short to fixate on the bullshit, there are still some movies, TV shows and comic books that are so intensely irritating they must be highlighted, because they start with a great premise that is then completely fucked up.

I mentioned this late last year, when talking about the most average of 2000ad strips in the past year, but after finishing the strip, it's worth repeating how disappointing the latest Hook Jaw revival was, missing the appeal of the entire concept by stapling it onto some metaphysical malarkey.

Hook Jaw was the simple story of a giant bloody shark that eats any fool that tries to tame it or make money from it. It only ate the stupid, because if you got into the ocean while Hook Jaw is roaming about, you're dumb enough to get chewed up.

But in this story, Hook Jaw is reborn as a ravenous elder god thing, attacking anywhere at the behest of some human arsehole. It's actually a genuinely unsettling idea that a pool or even a puddle could be full of flesh-eating terror, but you don't need to make a giant hungry shark with a fucking hook shoved through its jaw into something metaphysical to make it scary, it's terrifying enough.

It's overcooking the concept, and while you still get the odd moment of Hook Jaw chowing down on idiots foolish enough to fall into the sea - artist Leigh Gallagher brings the gore with relish - Hook Jaw doesn't need to become a mythological figure to be shit-pantingly scary. He's angry enough on his own.