The art of Claremont's X-plots 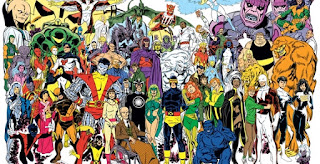 Marvel had refined the use of subplots in ongoing comic titles into an easy formula by the 1970s - plot A took the most space, Plot B would get a page or two before graduating to Plot A, while Plot C might start simmering with a single panel before rolling up the order. Keep doing that every issue, and you'd get the kids coming back, month after month after month. They had to see what happened next.

But nobody did it better than Chris Claremont, who also made it look so easy. Even with the ample plotting aid of his various artists, Claremont had almost complete control of the X-books' direction for 15 years, telling one big long story. He would introduce characters and mystsries, and then drop them for months or even years, before picking them up again. Shenanigans in the Hellfire Club or with the alien Brood or over the US government's registration of mutants - events would be set in motion and then put aside for such a long time, only to suddenly flare back up.

It kept you coming back, again and again, and the longer it took something to pay off, the bigger the thrill. Sometimes it got a bit much, and you had something like the first 10 issues of Excalibur, which set up a lot of plot and questions that Claremont then showed no interest in answering, but you knew you'd get there in the end (Although, with Excalibur, it took Alan Davis' return to the title in the early 90s to really get some answers about what happened to Colin, or what Widget's goddamn deal was).

These long-running plot threads also made Claremont's story feel more like a cohesive whole, even when partnered with a number of spectacular artists, who would send the X-saga spiraling in new directions as Claremont played to their penciling talents. There was a world of difference on the path from Cockrum to Lee, but the same themes and issues that kept coming up kept the story solid.

Some of the other talented writers working under that classic Marvel structure managed to fit in some beautiful character moments in between the relentless plot machinations, and Claremont did this as well, only needing to check in on someone like Nimrod every few months, but giving the story of the ultimate sentinel killer unexpected depth in every brief appearance.

No one could ever follow Claremont on the weird kinky shit he was so obviously infatuated with, and nobody could match his ability to keep you coming back either, but he did it again and again.