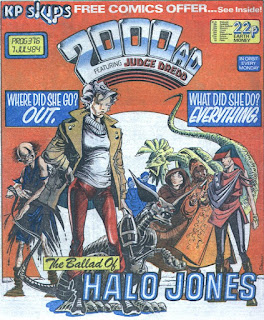 2000ad cost 55 cents an issue when I started buying it, somewhere in the early eighties. You got something that was basically printed on bog roll for your money, but you also got golden era 2000ad with stunning regular artwork by Steve Dillon Bryan Talbot, Carlos Ezquerra, Ron Smith and so many more.

The cost of weekly thrillpower has risen steadily since then, and there have been a few price spikes over the years. It just had another one last month, and is now just shy of $10, which feels like some kind of substantial barrier.

It's still the Galaxy's Greatest Comic, and paying more than $10 for a single issue  might give me pause, but I've getting regular doses of thrills since I was a very little Squaxx dek Thargo, I'm hardly going to stop now.