The incandescent whites of D'Israeli 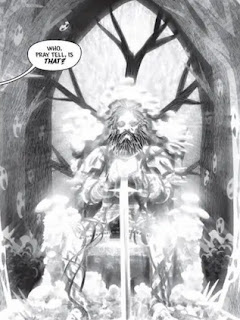 After bathing again in the bloody chum that was the recent Hook Jaw reboot in 2000ad, it's only fair and proper to throw some more actual love at the galaxy's greatest comic, and the art by D'Israeli in the Stickleback strip in particular.

Because it really is astonishing - his sharp, angular lines have always given his figures and backgrounds real weight, but everything literally shines as it is bathed in pure white negative space. This incandescent glow is breathtaking.

His colour work is exceptional, and very precise and orderly and proper, but nothing else in English-language comics looks like his black and white comics. He's paid all due credit to the late, great Uruguayan artist Alberto Breccia and his clear influence on his style, but made it unmistakably his own, that dependable line anchoring the literal brilliance.

The last time I was this knocked out by the use of negative space, it was in one of the early Sin City comics, because I just don't know how he does it, or how he gets this amazing effect. I don't want to know, I just want to bask in it, and maybe get a little sunburned.