Bob's weekend of hate: The Stand 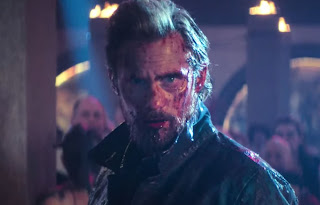 It feels like such a basic thing to complain about the latest adaption of The Stand, when everybody else who was interested tuned out long ago, but it's was just so immensely disappointing it's hard to let it go.

I read the novel half a dozen  times as a teenager, and it was easily my all time favourite book for at least three or four years. I'm still certain King's books will be read for centuries to come, because he captures life in late 20th Century America like nobody else, even when everything turns to shit.

The new adaption had some pedigree, with some real talents behind and in front of the camera, but it didn't look good from the start, with the focus on Harold bloody Lauder, easily the most irritating arsehole in the entire epic. Making him the main character of the series was a bad idea, but it was also particularly bad timing, since we've reached the point where society as a whole is just sick to fucking death of that kind of dickhead.

And while making your own thing out of King's blueprints is the biggest success for any adaption of the writer's works, the non-linear storytelling was not big or clever. You lost the slow slide towards the apocalypse, followed by the insanely fast tumble over the edge.

Instead, it was irrationally focsued on the long climb back up to civilization, at the expense of all else. It skips over the insane detail that King had in his story, always showing exactly what people needed and what they had to do to survive the new world. Cutting out tom and Stu's long trek back to the world at the end cut out the heart of their journey, and how much they depend on each other.

This new series had some pretty fucked up ideas about community, messed up all the Vegas stuff with a fatal mistaking of loud and crass for quiet and unsettling, did something with Trashcan Man that still can not be explained in words, and finished with a coda that really needed to be subtitled How Not To Parent In The Post-Apocalypse.

The few bright spots - the visual effect of the blazing ball of divine light at the nuclear showdown really was striking, and Greg Kinnear gave it everything and rose above it all to give Glen Bateman some real life - just made the dreariness of it all even more of a slog. Just dumb and unengaging on all levels, with some really good actors left adrift and directors struggling to get pathos out of the nonsense.

The end of the world never felt so tedious.