Judge Death vs Eddie the Head 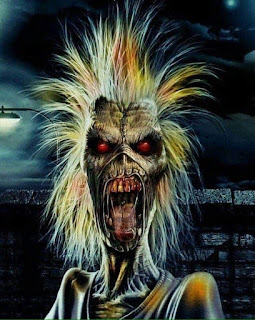 Even though everybody knows of the weird condescending  that saw Man Thing and Swamp Thing produced as the same time, and even though I have always been a fan of both Iron Maiden and Judge Dredd, I only just realised that Eddie the Head and Judge Death were created at pretty much the same time, in roughly the same place. 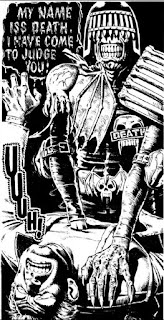 As the UK's skinny punk junkies of the late 1970s begin to decay, these desiccated features were the obvious end result if you took it all the way. Shambling along in undead horror, a rictus grin that screams of our own mortality, Eddie and Death are the symbol of an age that is still to reinvent itself in gaudy neon, and trapped with the rock and roll dead.