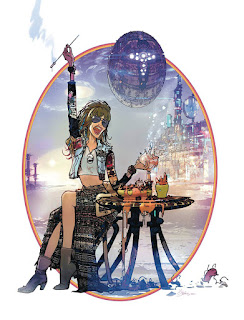 It's been an absolutely horrific year for everybody everywhere, but even as the whole world shut down in the pandemic, and even when the world's biggest comic companies closed up shop for a while, the Galaxy's Greatest Comic kept going.

It took a bit longer to get some of the issues, due to the entire global postal and goods distribution system breaking down, but this is hard to hold against Tharg, especially when the regular prog offered up a year of typically great stories, a few surprises, and some lovely covers that have shined on the shelves.

2000ad has been my comfort comic since I was five. It's always been there, even as the year it was named after zipped past and receded into history. And while it always strives for a certain level of excellence, the weekly adventures of the comic's characters have this year been an absolute lifesaver.

Not every story is a winner, because that's how anthologies work, but the ongoing experiments with special issues for younger readers have been a complete success, while some veteran creators have found new vigor with long-established stories. Judge Dredd remains the standard for all things 2000ad, even with no Wagner, but the best story of the year came on from a completely unexpected direction.

And that consistency is the key to 2000ad, and the secret behind the huge affection generated by its regularity. Every week, another dose of thrillpower, just as you like it. It might not keep a virus away, but it doesn't hurt.