The Last Box of Marvel: We don't talk about the funny books 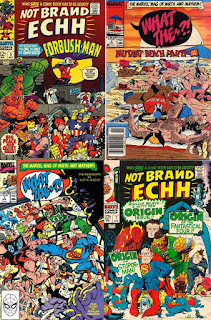 #9 in a 27-issue limited series
Marvel has made all the money in the world by taking all this dopey super hero shit really, really seriously, and both publisher and fans are always a bit embarrassed by its own attempts at self-satire - I honestly could not figure out if Not Brand Echh was an actual thing for years - which just makes their joke comics even funnier.
It helps that their piss-take comics have some lovely art. The jokes in the first half-dozen issues of What The-?, published in the very late eighties, have dated exactly as much as 30-year-old gags should, but there's Kyle Baker and some primetime Byrne/Ordway and a keen Mike Mignola and a bit of Hembeck and Todd McFarlane and Erik Larsen and Jim Lee and the horribly undervalued Hilary Barta - the first issue even has John Severin inking Steve Ditko, which is some kind of mad alchemy.
It all got a bit too Scott Lobdell later on, but What The-? was bright and silly and lovely to look at for a little while. Plus there is a one-page gag about the 'You Universe' with a proto-Comic Shop Guy that gave me a bit of an existential crisis when I was 13, so that's a bonus.
I've even tracked down a couple of Not Brand Echh issues, so I guess it does exist. It's the art again that shines  more than 60-year-old Stan Lee puns, with dynamic forces like Kirby and Colan getting loose and foolish, and the mighty Marie Severin getting groovy with her usual flowing line.


I've also still got the issue in the original run of What If that went for the funnybone, but ditched any of the attempts Marvel did with similar gag books since the year 2000 - they get way too inside-joke and have aged even more than their decades-older cousins. Marvel still doesn't really like to laugh at its own jokes, and ends up snickering about its friends instead.
Posted by Bob Temuka at 1:47 PM