The Last Box Of Marvel: The oldest ones are the movie ones 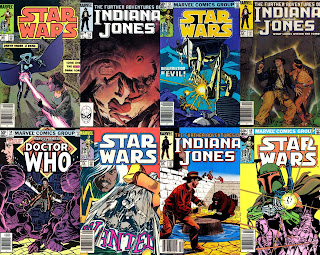 #6 in a 27-issue limited series
There are pieces of pure childhood floating around in this box, even though they have nothing to do with the Marvel Universe, and I just can't ever give them up after all this tine.

There's issues of The Further Adventures of Indiana Jones, Star Wars and Doctor Who, and I've had them all since I was nine and I used to read them over and over and over and over again, until every panel is imprinted on my brain like neurological silly putty.

There are some good comics in there - there's David Mazzucchelli doing some terrifically moody Indiana Jones, and Walt Simonson's art on his Star Wars comics is absolutely divine - but I'm not kidding anybody.

I'm not holding onto these things because of any artistic merit, I'm holding onto them because these comics are foundational in my actual personality, I can't take them out without losing something I would never get back. I'm just that fucking shallow.
Posted by Bob Temuka at 2:18 PM