The Last Box Of Marvel: Avengers assembling all over the place 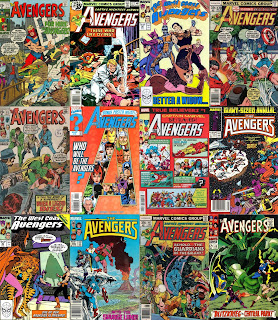 How much Avengers do I need in my life? Turns out I need the Earth's mightest heroes teaming up in clean, simple stories much more than I thought.

I have to hold on to the 15-issue straight run of 1970s issues that ends with the carnage-filled final battle against Korvac battle. It's mostly Byrne and Perez art, and will always be the ideal Avengers team in my head, with the added spice of the Guardians of the Galaxy bringing in their freaky 30th-century vibes. And that climactic issue was genuinely shocking back in the day, even if everybody is brought back to life with a bit of handiwaving at the end, it was bloody disconcerting to see them all wiped out like that.
And while I've got a lot of love for the handful of early issues I have managed to find down here at the arse end of the world - all extremely unimportant in the grand Avengers tapestry, but I'll take anything - I also have to rely on reprints to get things like the Kree/Skrull War issues or the Avengers annual where Rogue destroys Ms Marvel's life.
Reprint or not, they're all fun comics, and so are the ones I've held onto since the 1980s. There are the two issues of the Stern/Buscema run where Terminus fucks up the Savage Land and the annual where Hawkeye uses an ancient carny trick to save the universe. There's also the three West Coast Avengers issues late in the Englehart run where they take on the new Zodiac, and the first four issues of John Byrne's West Coast comics, which were absolutely the shiniest things on my local shelves in 1989
And then, apart from some Ultimates books on the shelves, that's almost it. The most recent Avengers comics I've got are the first few issues of the Busiek/Perez run from the late 90s, and they're more than two decades old ( and were retro in the first place). No Bendis era, no Hickman. None of Waid's recent Avengers comics or any of the current Jason Aaron run.
So maybe there is a limit to the number of Avengers comics. There's only so many times Ultron can make a shock appearance, or Kang can fuck up the timeline again, and I think I had my fill a long time ago.
Posted by Bob Temuka at 1:55 PM