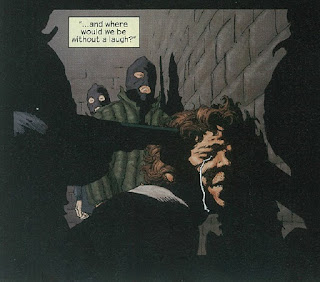 Marvel's 411 comic came out in 2003, when the US was still reeling from the Twin Towers attack, and was one of mainstream comics' admirable attempt to call for a little peace. But just because the comics were admirable doesn't mean they were actually any good, and almost all of the short stories in the comic were overwrought, clumsy and heavy-handed in a very 2003 way, (although they mostly look fantastic).

But while Mark Millar has made a very successful career in comics by being overwrought, clumsy and heavy-handed, his contribution to 411 is a surprisingly tender, moving and funny story, with a message that is always worth repeating.

As always, it's beautifully drawn by Frank Quitely, and 'Tit For Tat' also has a beautiful message to impose from the writer of Kick-Ass, with a Millar family story that confirms that an eye for an eye philosophy leaves everyone blind, and that a good joke from a cheeky bastard can always beat violence and murder.

It's still got a couple of brutal beatings and there are some superficial explanations of a deeply complex political and religious culture, but it's also got a light touch that smashes into a stunner of a final panel, where the consequences of not having a laugh now and then are made brutally clear.

Because where would we be without a laugh? Somewhere nobody wants to go.
Posted by Bob Temuka at 5:22 PM