The Last Box Of Marvel: Time is flat in the Marvel Universe 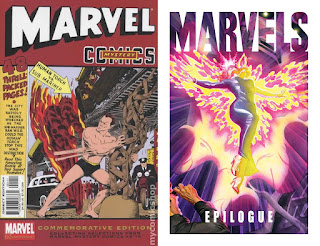 Most of the comics in this box come from the 80s and 90s, because the best Marvels are always from when you were 13-16 years old. There's just a handful from the past couple of decades, and the most recent thing in there is the Marvels epilogue by Busiek and Ross that came out a few months ago

The oldest Marvel comic story is in there right next to it too - a reprint of Marvel Mystery Comics #8-10, with the epic and slamming throwdown between the Human Torch and Namor, a battle which was a key cornerstone of that original Marvels series.

There are decades and decades of weird and wonderful comics between these two stories, and they're just two parts of many in the multi-level Marvel tapestry, but you can find almost everything that makes Marvel comics so addictive in those two stories.