TwoMorrows and the lighter side of fandom 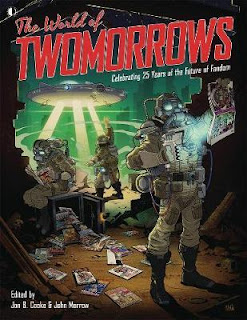 My pal Nik lent me a copy of The World of TwoMorrows - a 25th anniversary book all about the fan publisher and the many, many titles it has put out - and I genuinely didn't think I'd read much of it because it looked just a little too self-absorbed and insular, even for a gang that have put out dozens and dozens of issues about Jack Kirby.

But it turned put to be a terrifically addictive read, and I'm halfway through the blasted thing now. It's easy to read in bits and pieces, because it's all a bit repetitious - 'I'm just trying to catch the thrill of getting my first comic from the drugstore rack', says absolutely everybody - but it's full of gossip and anecdotes and comic history and the weird pressures of putting out a regular publication.

And, most of all, it's just so refreshing to read about the nice side of fandom for once. Online discourse is so rough, and so exaggerated, everything is the worst or best thing ever. And it's all riddled with comicsgate morons and people who leap to the nearest bad faith argument for anything that doesn't support their limited worldview.

There's not so much of that in the TwoMorrows books. It's just a real pleasure to read something so unashamedly positive, so full of love for the medium and the people who have created stories and art in it over the years. They all have their own small prejudices and tiny hatreds - comics published after 1995 rarely get any love in the pages of many of TwoMorrow's publications, unless they're drawn by a favoured artist - but it's never the most important thing. It's the love and affection for the comics that matters over everything.

You might think Firestorm is dopey as hell, but there are people who love the dumb flame-brain, and there is no need to piss on that burning love in these pages. The TwoMorrows book is one of the most indulgent things it has ever published, (which is saying a lot), but it's also a gentle reminder that you can love something without always being a total dick about it.
Posted by Bob Temuka at 7:06 PM