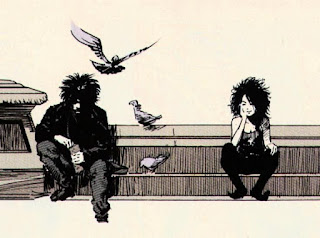 I get embarrassingly emotional about disposing of old comics every week, but even with that kind of naked sentimentality, some of the easiest to get rid of are the Neil Gaiman comics.

I'll probably hold onto his Sandman stuff (but none of the spin-offs), and I'll always have a copy of the original Books Of Magic, and any of the brilliant original graphic novels he did with Dave McKean still pack a punch. But the amount of Gaiman comics in the collection has been steadily deflating in recent years. I once had almost all of his comics, now I've just got a handful.

It's not that I've grown out of it or anything. While there has been a sense of repetition in a lot of his stories over the past decade, Gaiman's voice is still an interesting and comforting one, mixing one part hard intellect with two parts whimsy and a whole lot of hand-holding and playful fantasy. I still enjoy a lot of his comics, and will continue reading them for years.

But I don't need my own copies, because finding lesser Gaiman is always so easy. It's easier to hold onto something like the Nth Man rather than 1602 or Whatever Happened to the Caped Crusader  - and not just because The Nth man is one of the top five Marvel comics ever created -  because 1602 and the Batman comic will remain in print on the sheer power of the Gaiman brand for a long, long time to come.

Larry Hama has been a God in my world since I was 12, but Gaiman isn't just a comic writer, he is a Big Name in publishing and general media now, and libraries and bookstores will be full of these things

So it doesn't matter if I sell off the original Stardust issues that I've had since the 90s - even though parting with gorgeous Charles Vess is always such sweet, sweet sorrow - because if I ever get the urge for more faerie in my life, it'll always be down the local library.