The Last Box Of Marvel: Silver Age goodness, unearthed by the grave 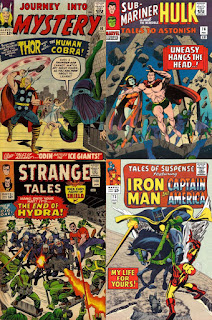 #8 in a 27-issue limited series
It used to be impossible to find affordable 60s Marvel comics - when I was fiending on the Marvel habit the hardest as a young adult in the 1990s, the few that I ever saw for sale were prohibitively expensive. You might see an average Kirby/Lee Fantastic Four from the latter half of their run going for $50, and that was about it.
There's a lot more floating around now, and I don't think it's just because I've stretched my personal horizons and don't live in a town of 3000 people anymore. I just think that time is catching up with us all, and the sixties kids who collected and hoarded their childhood treasures are all old and dying off at a rapid rate, unlocking pristine collections brought together over a lifetime.
This might be morbid, but life is short and we're still here, so take advantage of it while the can, and the next generation snatch up your shit. Now I've got a couple of issues of Tales to Astonish, Takes of Suspense and Strange Tales, and three early Journey Into Mystery issues, all for less than the price of an average new comic.
I salute the dead dudes who left these comics behind, and their baffled family who unloaded it for as much cash as possible, as soon as possible. The Silver Age is unlocked by death, but the comics survive.