The Last Box Of Marvel 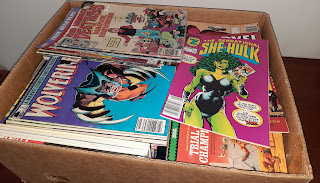 I keep my comics in banana boxes, because you can fit a couple of hundred regular-sized individual issues in each one of those bad boys - along with more than a few Stephen King and Fighting Fantasy books -  and they're so easy to stack and hide under the bed.

And after years and years of buying every single Marvel comic I could get my hands on, and even more years pruning and refining and sharpening that collection, I now just have one. There's only one box left of Marvels.

There are hundreds of other issues elsewhere, on bookshelves and in parts of the collection that are devoted to creators – there are Marvel comics in other boxes full of stories by Morrison, Waid, Brubaker, Moore, Millar, Davis, Ennis, Mignola and Miller. There is also a significant amount of X-Men comics that live in their own pile in the corner and a lot of Alex Ross and Punisher and Steranko comics on the main bookshelf.

But all the rest fit inside one single banana box, and for the next 27 days, I'm taking advantage of the rights of the proprietor of this Tearoom to catalogue the shit out of them, getting a snapshot of the Marvel comics that are worth keeping in the year 2020, and trying to explain why they're still there.

(It's no great secret. The reason they're still here is almost always nostalgia and/or great art. There's nothing else.)
Posted by Bob Temuka at 2:04 PM