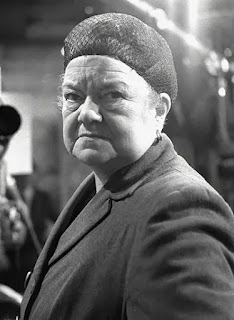 I have a deep and unreasonable hatred of Coronation Street. It's been on television as long as I've been alive, and I've never watched a full five minutes of it, let alone an entire episode. My Nana loved it, but I have had to leave rooms and houses because it was the only thing on the TV.

It all stems from one Friday night in the very early 1980s where I wasn't allowed to watch the latest episode of the Incredible Hulk and they was my favourite TV show ever created and nobody had videos so if I missed it, I missed it. We were staying at the farm where my Nana worked as a housekeeper, and her and the farmer - a bloody brilliant old bloke named Mr Coupland - never missed their Coro, and I might have been throwing an epic tantrum, but I was shit out of luck.

I had to leave the room, which was fine by me, because Ena Sharples and her terrifying hairnet scared the living piss out of me.

Understand, we're very far away from northern England, but Coronation Street is a big freaking deal in New Zealand. There are literally stories on the mational news when they change the screening time on TV One. For the past year or so, they've been playing it in two time slots, because they got so far behind the UK screenings that everybody was complaining about spoilers, so they skipped ahead a whole year, with the prime-time stuff being the very latest from the UK, while the skipped episodes still played at a different time, so nobody would miss out.

You can talk about how difficult it is to follow timelines in comic books, but my Nana would not have had any trouble with a duo-timelined Coronation St.

It's understandable why people like it so much - in a world of uncertainty and change, Coro is always there. But it's also sheer televisual torture for a certain kind of entertainment consumer, and I'm one of those. It's just as well there are so many others things to read and watch and listen to.

Still, it's always been a banging theme tune, and I've always liked its slow shuffle. Maybe because it sounds like a mournful wail for the working class heroes of the show, or maybe it's because it always made my Nana so happy.