The Last Box Of Marvel: Oh my God, it's full of stars 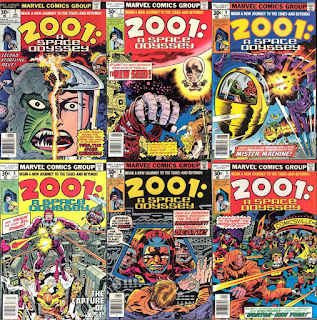 I wouldn't trust anybody who says they've got a comic book collection, but doesn't have any issues of Kirby's 2001. It's essential and witty and bombastic and overwrought, and it never gets republished. Everyone needs more 2001 comics in their diet.

I've almost got them all, with just a couple to go, and only just got #5 this year. I would give anything for the original Marvel Treasury comic that adapts the movie, but I'm sure I'll get there one day.

And even though they're a spin-off from one of the greatest movies ever made, they're also 70s Kirby at his purest. In a decade when he was still tossing out thousands of crazy ideas about art and philosophy and the nature of power that everybody else is still catching up on, his 2001 stories have a fair chunk of those ideas in every issue.

Free of the capes and spandex requirements (which he still brought into a couple of issues in a particularly demented manner), this is hardcore Kirby, stabbing right into the brain. It's comics at its very best.

15-20 years ago I asked the owner of a local comic shop if he had a copy of the 2001 treasury adaptation and he handed it over after rummaging around in his back room for a minute. When I asked what he wanted for it he said I could just take it. I came back weeks later after I'd read it to thank him and found out that he wasn't even aware it was a Kirby book!