Marvel can't laugh at its own jokes


Marvel has built its superhero universe on a foundation of deadly seriousness. That drive to treat the goofiest damn concepts like ancient gods and modern super-soldiers with utter seriousness has set the entire tone for its entire comics canon, and has transferred handily into its staggeringly popular movie series.

It goes back to the days when Peter Parker was still trying make the rent while ducking the nefarious clutches of Doc Octopus, and carried through the cosmic angst of the seventies. It was there in the desperately unironic scratchings of the 1990s, and was there again in the new blood of nuMarvel, into its current confused incarnation.

But with the kind of talent the company has attracted over the years, it can't help making fun of itself every now and again. It just doesn't need to always look so embarrassed by it afterwards. 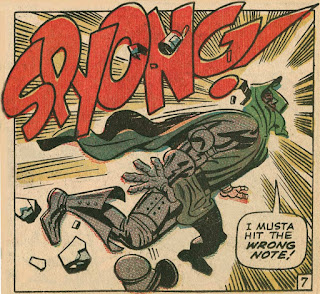 When I was at my peak Marvel obsessions, sometime in the early teens and the late 1980s, I honestly had no idea if Not Brand Echh was a real thing or not.

I would see snide mentions of it in letter columns and bullpen bulletins, but all the old Marvel stuff I read was in reprints, so I could never see the checklists that would have confirmed its existence. I would see them talking about Forbrush Man and this strange, vague title, without getting any of the context.

I was eyebrow-deep in Marvel Handbooks and buying any piece of Marvel-branded rubbish that made its way all the down to my part of the world, and I really couldn't tell if Not Brand Echh was some weird joke I wasn't getting. (To be honest, I still don't even really get the joke of the title itself. Is it an ad gag? Is DC Brand Echh? What does that even mean?)

And in the few articles I saw about the early days of Marvel, nobody ever talked about the title. If it was mentioned, it was only ever in passing, and everybody moved on quickly, embarrassed by the comic, like it was the drunk uncle who shows up at Christmas dinner and always makes terrible racist jokes.

It was only a few years ago that I got my first copy of this fabled comic, and it turned out to be exactly what I expected, some daft and silly jokes about Marvel's sixties output, along with a couple of soft jabs at the opposition.

It's not bad, with some loose artwork from the Golden Age of Marvel – there is some lovely Kirby and Colan art, and it always provided a wonderful outlet for Marie Severin's lovely, vibrant cartooning. Like every single superhero parody ever, it all owes an enormous debt to Kurtzman and Wood's Superduperman, but this is Mad-lite - while it is still crazy enough to still have some energy after all these years, it's a lot tamer than some of its counterparts.

So, however much fun the creators were having – and Stan Lee and Roy Thomas' scripts looked like they're were glad to make fun of their own icons - it only lasted 13 issues, and it was lucky to make it that far. It was quickly ignored, and was only properly reprinted in a Masterworks edition this year, (once they'd reprinted every other single early Marvel comic). 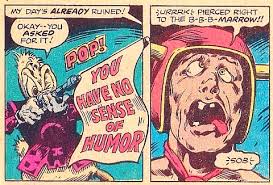 The embarrassment was clear from the start – every issue of Not Brand Echh had a banner proclaiming that it obviously not a good comic, because humour comics could never be as good as the latest superhero slugfest. So Marvel stayed away from the humour for the most part, and was once again a very serious house in a very serious world.

There were still odd things like the occasional Fred Hembeck comic, or the awesomely deadpan Howard the Duck, or non-Universe titles like the Crazy humour mag, but they were definite exceptions to the rule. 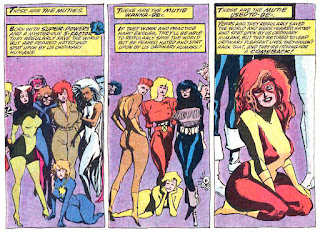 But by the 1980s, there was a whole new generation of writers and artists, who were - almost to a person -  total smartasses, so it was only a matter of time before it got back into the joke business, with a new version called What The-?

After a four-issue limited run, What The-!? actually lasted a good couple of years, making it arguably Marvel's most successful parody comic. It followed the Not Brand Ecch pattern of gentle ribbing at the expense of Marvel's biggest characters (and creators), and wasn't afraid to take the odd genuinely affectionate potshot at the Distinguished Competition.

A lot of the jokes that filled What The-?! are seriously dated, but this is some interesting meta-commentary on the comics business that you wouldn't find in Power Pack. And there is a strong line-up of creators, with some grizzled veterans slumming it, and a bunch of young talent given some of their first shots at proper professional work.

So you'd find Hembeck was still there, and the great John Severin would pop in for a Nick Fury gag strip, while you could find Kurt Busiek and Kyle Baker getting up to some mutant merriness and some very early Mike Mignola art on a Wolverine parody. 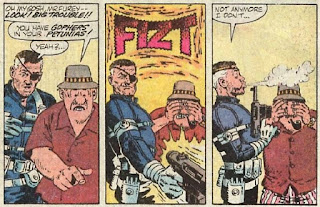 What The-!? eventually faded away, as the creative talent got thinner, and Marvel hasn't really tried to do any more ongoing parody comics since, and hasn't even reprinted its eighties efforts in any format.

It still puts out the odd goofy comic, including the occasional Spider-Ham comic, but most of its parodies tend to be one-off things put out to tie in with the latest big crossover event, or can be found in the occasional gathering of alternative artists like the most recent Strange Tales comics, or a true oddity like Pete Bagge's Spider-Man comic.

On the other side of the big two superhero universes, DC never really had anything as overtly parody of its own comics as Marvel did, unless you count the various Mad parodies, but its general superhero universe has always been a bit more comfortable with its goofier elements.

It was, after all, a company that once had Batman and Robin teaming up with Jerry Lewis, and Don Rickles showing up in a a Jimmy Olsen comic. And one of it's most successful comics of the 1980s – the brilliant Justice League International books – almost set the tone for its entire universe, with gentle ribbing of its biggest characters.

That sense of self-parody has faded a lot in the recent Geoff Johns era, where everything has gone a bit Marvel and turned into all seriousness, all the time, but DC can still easily make fun of itself, without worrying too much about who might get offended by their gags. 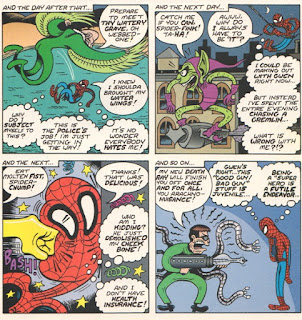 Marvel would much rather hope you don't notice the dopiness, and would much rather you look at the latest same old All-New, All-Different seriousness. They're still too scared to admit that all this superhero craziness is just nonsense a lot of the time.

But there is nothing to be embarrassed by here, and even something unique to be found in the older parody comics of the sixties and eighties. It's where you can find that intriguing meta-commentary on the state of contemporary comics industry, and some puns, while still groan-inducing, are eternal.
Posted by Bob Temuka at 11:21 PM

As someone who was too young to have read Not Brand Ecch when it was new on the spinner racks but did get a few reprints in the first few comic-size issues of Crazy! in the early '70s, as well as reprints of many other Silver Age Marvels, I never got the impression that Marvel took itself too seriously, certainly not in the '60s and '70s. Certainly by 1964, Stan often included little jokes in the credits and captions, something that to the best of my knowledge DC never did in that era, and the term "Brand Ecch" was a joke referring to commercials that compared their product to "Brand X". Yes, it was yet another rip off of Harvey Kurtzman's early Mad comics of the early '50s (before it became a magazine), but it was goofy fun while it lasted (I got a few originals in ye olde comics stores, and they didn't cost all that much). The last superhero comics spoofs I've read have been some of Alan Moore's America's Best Comics material.