The Last Box Of Marvel: The only Hulk (with Marlo and Motormouth) 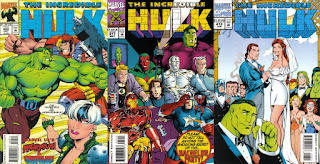 I've got a couple of the Essential books, the Future Imperfect comic with the lovely Perez art, and a surprising amount of Australian reprints of the Sal Buscema era. But after selling off my copy of #115 the other day, the only Hulk comics I still have left in this box of Marvels are three issues of the Peter David/Gary Frank run from the early nineties.

Actually - apart from a significant amount of the dorkiest Star Trek comics ever created - these Hulks might also be the only Peter David comics I have left. It was all those awful puns and pop culture references that did me in. I got rid of all the other Hulks and X-Factors and Aquaman comics long, long ago.

His Hulk run was long and prodigious, and had many ups and downs, but I was right on target for those ultra-slick Gary Frank issues. Frank was only a couple of years into his professional career, and still had some serious issues with his anatomy work, but his art was clean and clear and so, so shiny.

I couldn't tell you why I have a fondness for Motormouth and Killpower's appearance, but the other two issues are there because I am a ridiculously soft romantic, and I always cry at weddings. And at Captain America's face on that bachelor party cover.