The Value.. Of Everything 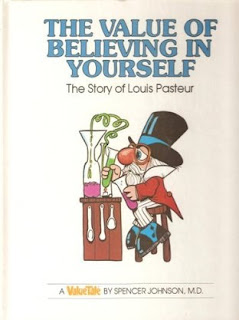 There is a nine-year age gap between myself and the lovely wife, which means there are a lot of cultural milestones that we do not share. As kids, we watched vastly different TV shows and read  books that were utterly unlike each other. I'm in the Sapphire and Steel generation, she's more Roswell.

So when we merged our books and CDs and movie collections together more than a decade ago, there was very little overlap. But one thing we do both share is a deep and lasting fondness for the ValueTales Books, and have both held onto the half dozen books we've had since we were both kids.

The books were published from the 1970s through to the 90s by a Californian outfit, with writers Dr Spencer Johnson and Ann Donegan Johnson offering incredibly simplistic history lessons about famous historical figures, They were always so attractive, with hard white covers, light and breezy artwork from Stephen Pileggi, and interesting trivia about the great and the good.

Some of the people they portray in such a positive light don't really stand up in the harsh glare of reality. But to their credit, they didn't really focus on kings or politicians or generals or anybody else who ruled their world with an iron fist, they focused on scientists and philosophers and trailblazers and artists and people who tried to make the world a better place, including a decent amount of women and people of colour.

There are worse ways to learn about history.

After our wedding, she brought The Value of Kindness: The Story of Elizabeth Fry into the marriage, and I brought Louis Pasteur and his Value of Believing in Yourself. The more values we have to pass on to the next generation, the better.
Posted by Bob Temuka at 5:35 PM