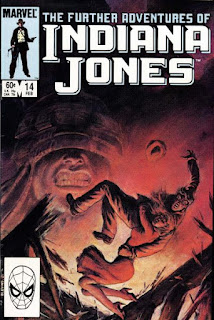 David Mazzucchelli is a comics genius. Everybody knows this.

His work on Daredevil and Batman comics in the late eighties was absolutely superb, with sparse, clear action scenes, and characters full of weight, both dramatic and physical. He could have done anything after that and, brilliantly, forged his own path into art comix, with the complex adaption of City of Glass, and the vast Asterios Polyps.

There are some lengthy gaps between his big projects, but Mazzucchelli's work is worth the wait. Everybody knows this. I even knew it before I had any idea who he was. 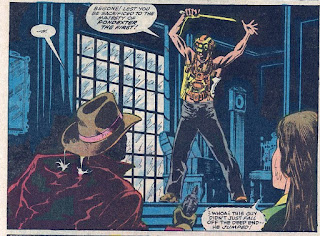 Before he was a stone-cold genius, Mazzucchelli was another jobbing comic artist, and took any assignment he could. After getting his foot in the door at Marvel, his name would pop up on issues of Master of Kung Fu or X-Factor. And in 1984, he did an issue of the Indiana Jones comic that Marvel was publishing at the time.

He only did one issue, before moving on to do Batman: Year One or something. It was just another job and I’d be surprised if he even remembered doing it. But that issue blew my freaking mind. 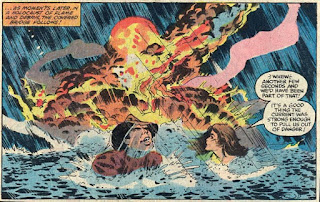 I had a brief obsession with Marvel’s Indiana Jones comics around the time of Temple Of Doom, but because I was a poor kid on the arse end of the world, I could only get my small, sweaty hands on a few issues. When I did, I would literally read them to pieces.

The 14th issue of the Further Adventures of Indiana Jones was one of them, and I must have read it a hundred times when I was a kid, until it was burned into the deepest recesses of my memory. It was exciting and a bit spooky and had a great Bret Blevins cover (Blevins would later adapt the Last Crusade movie), and it was almost the perfect Indiana Jones comic.

Mazzucchelli’s art was – as should be expected for a eager newcomer - pretty generic under 'The Saint's' inks, and there wasn’t much sign of the crazy genius that the artist would become. But he had a great sense of pacing, right from the start, and there are certainly premonitions of the intense, exciting action scenes he would craft later in the decade.

Indy leaps through flaming bridges, dodges falling boulders in the rain, swings across precarious cliff faces, and narrowly avoids getting his head taken off by an ancient sword swung by Pondexter The First. It’s a Marvel comic from the eighties, so it’s full of wordy exposition, but it still rocks along at a fair clip, and the artist still gets to do creepy, quiet moments, full of shadow and expectation in an empty resort in a thunderstorm. There's even room for a tiny bit of romance. 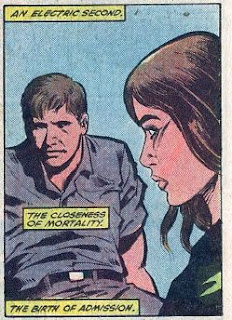 I just read this little comic for the first time in more than 25 years, and it’s still a cracker of an Indiana Jones story. With a straightforward plot of possession from the horrifically underrated David Michelinie, it’s a neat little one-off.

And I had no idea that it was Mazzucchelli's art that I had enjoyed so much, all those years ago. He was still finding his voice as an artist, but he was getting there. 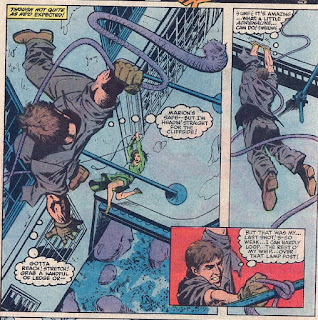 Of course, when I read it back in 1984, I had no idea it was a one-off, and thought it was the most important Indiana Jones comic ever, and I spent years wondering what was the ghost Marion might had seen. Discovering later on that it was just a random fill-in that didn’t really mean anything was a full-blown existential crisis for a while.

But even if it is just a fill-in, it's a swift little adventure with some promising early art from a modern master of the form.

It's always worth finding, or rediscovering, little archeological treasures like that.
Posted by Bob Temuka at 9:42 PM