The Last Box of Marvel: Epics at the end of the world 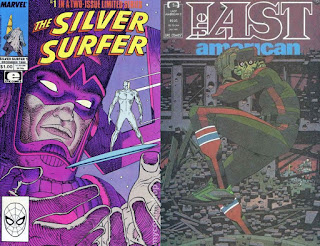 Apart from the substantial Groo collection that lives in its own special section in the bookcase by the bed (because you never know when you'll need some Groo in your life), and the couple of issues of Epic Illustrated that are lurking in the cupboard, the only Epic comics I have left are two short series about the end of the world.

One of them is the Moebius Silver Surfer story that really is an absolute epic, and anything else anyone has tried to do with Galactus since has been largely redundant after this. It took me many years to figure out if it was in continuity, or if it even mattered, but the gorgeous pastel sweep on Moebius' art was always so well suited to the gliding, slender Silver Surfer.
The Last American series by Grant, Wagner and McMahon really isn't very pretty - McMahon's art is jagged and grim and dark, because this is the story about the end of the world, with all hope steadily running dry. It's got a nastier edge than the usual sci-fi high-jinks the creators always brought to their 2000ad stories - there's still a song and dance number, but it just adds to the loneliness and despair.
There's still some hope for humanity at the end of the Moebius comic, even if humans are proven to be shallow, vain and stupid creatures by the arrival of the world devourer, they at least exist at th end of the story. There's nothing left in the Last American. Nothing at all.
Posted by Bob Temuka at 2:01 PM