Who needed Love and Rockets anyway? 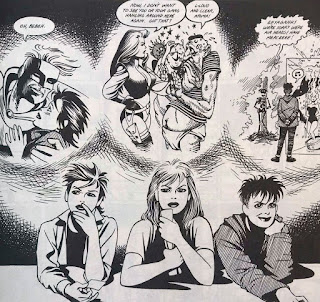 "The Hernandez brothers appear to be trapped in a literary time warp. The time is 1968. Comics at the time were still squeaky clean; faithful followers of the Comics Code. An outlet was needed for creative people who didn't fit in the mainstream; for stories that didn't conform to the orthodoxy imposed by the code.

"The underground comic filled this void. With a few notable exceptions, they were rather crude and poorly executed; but even so they were a refreshing alternative to the norm. Love and Rockets seems to be firmly rooted in the underground tradition.

"There's just one problem with this. The time and need for undergrounds has come and gone, just as the social upheaval which spawned them has subsided. Even as women no longer need to burn their bras just to get our attention, so too do comics no longer need a separate movement to espouse alternate views and lifestyles."

I've read a tonne of reviews of Love and Rockets over the past 30 years, but the one this excerpt is from - written by R A Jones and published in Amazing Heroes #48 in 1984, just a few years into the Los Bros' long comic career - has always stuck with me.

Partly because it's a rare review of the comic that is less that effusive in its praise, but also because it's a little bit incredible that Jones thinks it's all a bit pointless, because there's nothing more to be said about alternate lifestyles after the undergrounds of the 1970s said it all.

That's certainly a perspective. It's an unfortunate one one that is unfathomably wrong in hindsight, but it's a perspective.
Posted by Bob Temuka at 6:57 PM