Figuring out the absolute best time to sell 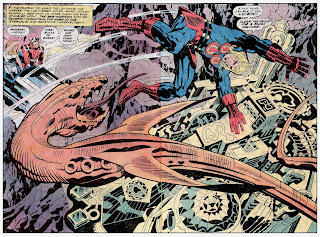 Slowly selling off the flabby edges of my vast and unruly comic collection has taught me a lot of valuable lessons about the commerce of the whole thing, but one of the first things I learned was that if it's a comic that is about to be adapted for a movie or television show, it's all about the timing.

So I've got a few issues of the Eternals to get rid of - a few random issues from the original Jack Kirby run and a full set of the Gaiman/Romita Jr limited series from the mid-2000s. They're in the growing pile of stuff to be sold off, but I'm not ready to put them up on the local online auction site yet, because you've gotta wait for the enthusiasm to peak.

It's no use offering them up when the news of the movie first came out - even with the first hints of buzz and the photos showing off the astonishing new abs of Kumail Nanjiani - nobody really gives a damn about the whole Eternals thing just yet.

And it could be a bust if you wait until it's been completed and thrown out there in the world, and turns out to be a complete turd (although to be fair, none of the Marvel films have really reached that level of awfulness, even if some of their TV shows have). Interest in the whole thing can die off incredibly suddenly, and you're stuck with comics that reek with the stench of the failed movie.

There's always the chance something will go a bit Walking Dead, where the main peak of interest in the whole concept was a good three or four years after it came out, but when you look at the sheer number of adaptions being pumped out, that's definitely an anomaly.

No, the peak time is definitely in that sweet spot between the time the first trailer drops, and the premiere date. If the trailer builds up enough buzz, it might be worth waiting until just before the movie comes out, but anywhere in that time is golden.

So I'm hanging out for that first Eternals trailer, not because I give a shit about Ikaris and Sersi and all the rest, but because I can sharpen up the comic collection a bit. It's going to be rough getting rid of the Kirby - it always is - but I'll be able to find a collected edition at the library easily enough. And the 2000s series is just taking up space. All I need is that anticipation which I can feed off.
Posted by Bob Temuka at 6:17 PM