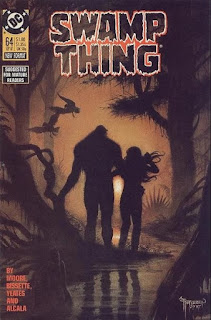 There have been a shitload of Swamp Thing comics since Alan Moore finished up his hugely influential run on the character back in 1987, including several reboots and revamps from a large number of extremely different creators.

But after reading that original run in one go recently, and coming to an end where Swampy and Abbe head off and live on a giant lily pad in the swamp, I've found it surprisingly easy to ignore absolutely everything else that has happened to the character in the past 33 years

There were some good comics over those years - I have a particular soft spot for Rick Veitch's aborted run, and for the stories by a young Mark Millar that closed out that long run (humanity being saved by a reformed Arcane might be illogical and sentimental as hell, but always worked for me) - but it's also just as easy to write it all off as a fever dream, and that the comic came to an end with the characters living happily after, all those years ago. All the craziness and reboots and re-incorporation into the world of super-heroes just didn't happen.

You can do this with almost any comic, especially when the continuous publication of many characters sees their status quo constantly shredded. Just choose a place to end it, and you can do it. It's really easy. Maybe Spider-Man finished for you when Ditko first left, or maybe you can end it with Dan Slott's recent epic-length run. How many more Spider-Man comics do you need anyway?

The mainstream comic book industry is pathologically allergic to an absolute full stop, but the brilliance of that punctuation is that you can put it anywhere you choose. And I choose to end Swamp Thing there.
Posted by Bob Temuka at 2:41 PM