The Young Ones and the ghost flatmate 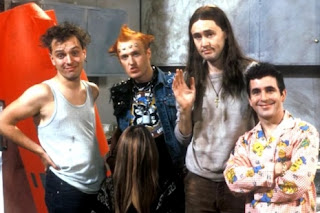 Ever since I first fell head over heels in love with the Young Ones TV show, I've watched every episode at least a hundred times each. I know the dialogue backwards, I'm familair with the lyrics to every song performed in every episode, and the way Vivian smashes Rik and Neil over the head with a cricket bat will always be strangely comforting.

So, finding out recently that there was actually a fifth flatmate after all, hidden in the background of every episode in the first season, was more than a little surprising, and actually quite creepy.

In my defense, I mostly watched the show on video tape, recorded off a TV screening in the very early nineties, so the appearances of that fifth flatmate were often hidden in the sludgey quality of the video format and the fuzz of an analogue transmission. I saw a couple of the appearances of the flatmate, with the long hair hanging over the face, but never realised they were there in every episode.

And there is something quite unsettling about it. The Young One's brand of surreal humour often left things feeling unreal, with the manic events happening on a strange level far from the real world, and the idea that there was a flatmate that was more ghost than person fits into that.

The creators of the show have refused to acknowledge that the fifth flatmate was even a thing, which adds to the unreality of it all, but that long-haired apparition is now as real as any of them. They never said much, but they were always there.
Posted by Bob Temuka at 6:14 PM