Video games can be good for you 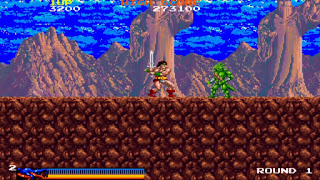 Growing up, I was constantly being told that video games were bad for me. All those flickering lights and beeping noises were obviously harmful. I should have been out there playing sports in the sun, getting skin cancer from the hole in the ozone layer and my head kicked in at the bottom of a scrum on the rugby field.

And sure, the main places I could actually play games - long before every home had a console of their own - were incredibly dodgy places where there was the odd stabbing. My local was down the back of Lester's fish and chip shop in Temuka, and while Lester did some fuckin' great chips, it wasn't a place where the good kids hung out after school.

But video games weren't all bad, and the vast amount of time I spent blasting away at spaceships wasn't totally wasted. There were some good points about them too.

After all, they kept us out of trouble. We weren't doing too much dodgy shit when we were just trying to get to level three on Rastan. And we didn't spend money on booze or drugs or anything like that, not when we needed all the spare change we could get to get them into the machines.

And playing video games cemented great friendships, just as any sport or pastime can do. Trying to beat each other's high score, or straight up taking on your mates in a pixelated wrestling ring was enormously fun, and I met people who I am still friends with, years later.

And on a personal and entirely unscientific level, I'm convinced that all that time playing those games means my hand-eye coordination and spatial orientation is off the charts. I don't have any proof for this, but my reaction times were honed to a fine point by hours and hours of playing Doom and Tomb Raider, and I'm certain that has something to do with the fact that I've never had a car accident in my life.

There are still those fears about video games going around, and sometimes they have some basis in fact - like anything, gaming should be done in moderation, and if you spend your entire life doing nothing but playing video games, it's probably going to fuck you up.

But it turned out that all those adults who used to tell me I was wasting my life playing video games were pretty much full of shit. I turned out okay.
Posted by Bob Temuka at 6:42 PM