No such thing as a cursed movie 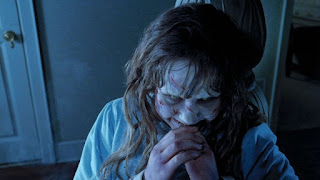 There's a new documentary TV show coming out that promises to expose the horror of 'cursed movies', and how some films have a higher-than-average number of deaths and tragedies associated with them. And the documentary makers have their work cut out for them, because arguing that certain movies have a metaphysical shadow hanging over them remains one of the dumbest fucking arguments in the history of cinema.

It doesn't help that they're always looking at the usual suspects, and are focusing on exactly the films you'd think they would - all the big devil possession and ghost films that often dwell on the darkest side of humanity. They never do these kinds of things about Pretty Woman or Toy Story or The Adventures of Buckaroo Banzai, it's always the ones that have some kind of horrific or theological bent, as if curses were a real fucking thing.

It's somewhat curious that so many of these movies are about the devil - if Satan is actually a real thing, wouldn't the lord of darkness be thrilled to get some free publicity?

Ultimately, it's all a matter of publicity. Scary movies for years have played up stories of people fainting or throwing up or going into seizures and speaking in tongues at screenings, and while that's certainly a thing that has happened, they're usually painfully rare cases.

It's actually pretty fucking tasteless when you're talking about real tragedy - real lives have been lost and destroyed, and implying that it's all part of some curse because they chose to do a particular movie is an insult to the victims and their families.

After all, these films have so many people involved, there is always going to be some bad luck involved. Even the lowest budget can have dozens of people involved, and the biggest blockbusters have thousands, as anybody who has sat through the credits for some lame sting can attest to.

There is always going to be a film where more than the usual number of tragedies occur, and anybody convinced that making a horror movie is more dangerous than any other kind of film might be getting a bit too close to the fiction.
Posted by Bob Temuka at 6:30 PM