The wife and I and Buffy 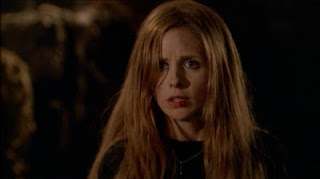 The lovely wife and I have been a couple for 15 years, and she absolutely did not enter that relationship as a nerd. Even though she was a Roswell fan, she didn't give a damn about Star Wars or Doctor who or anything. She still really doesn't and humours me most of the time, but she also doesn't mind the odd dose of geek shit.

Buffy The Vampire Slayer was the first win, back in 2006 or so. She wasn't really watching it, but I was doing a big re-watch, and she got sucked in. We watched the whole series together, and still both have a huge fondness for it.

We don't talk about Buffy that much anymore, because some of it hasn't aged well, and that awful flat lighting that makes everything look so 20th-century is genuinely hard to get into, especially when we've all got eyes that have become used to prestige TV. But it was really fucking good, with lots of kick-ass fighting, good lines, aching continuity, surprising twists and all that jazz. It was an excellent introduction to full-on monster genre fiction, and we both will always have a fondness for it because of that.

After that, she went to Star Trek movies and watched Battlestar Galactica and had a good time, mainly because she doesn't give a damn about the big picture. We still have our own interests and cultural obsessions, but she's 100% nerdier than she was when we met.

And it was all thanks to Buffy, who got the ball running. She watched a lot of it again recently, but got stuck halfway through the sixth season, because it all got too depressing and dark, and she's probably going to leave it there. That's okay, Buffy already got us where we are.